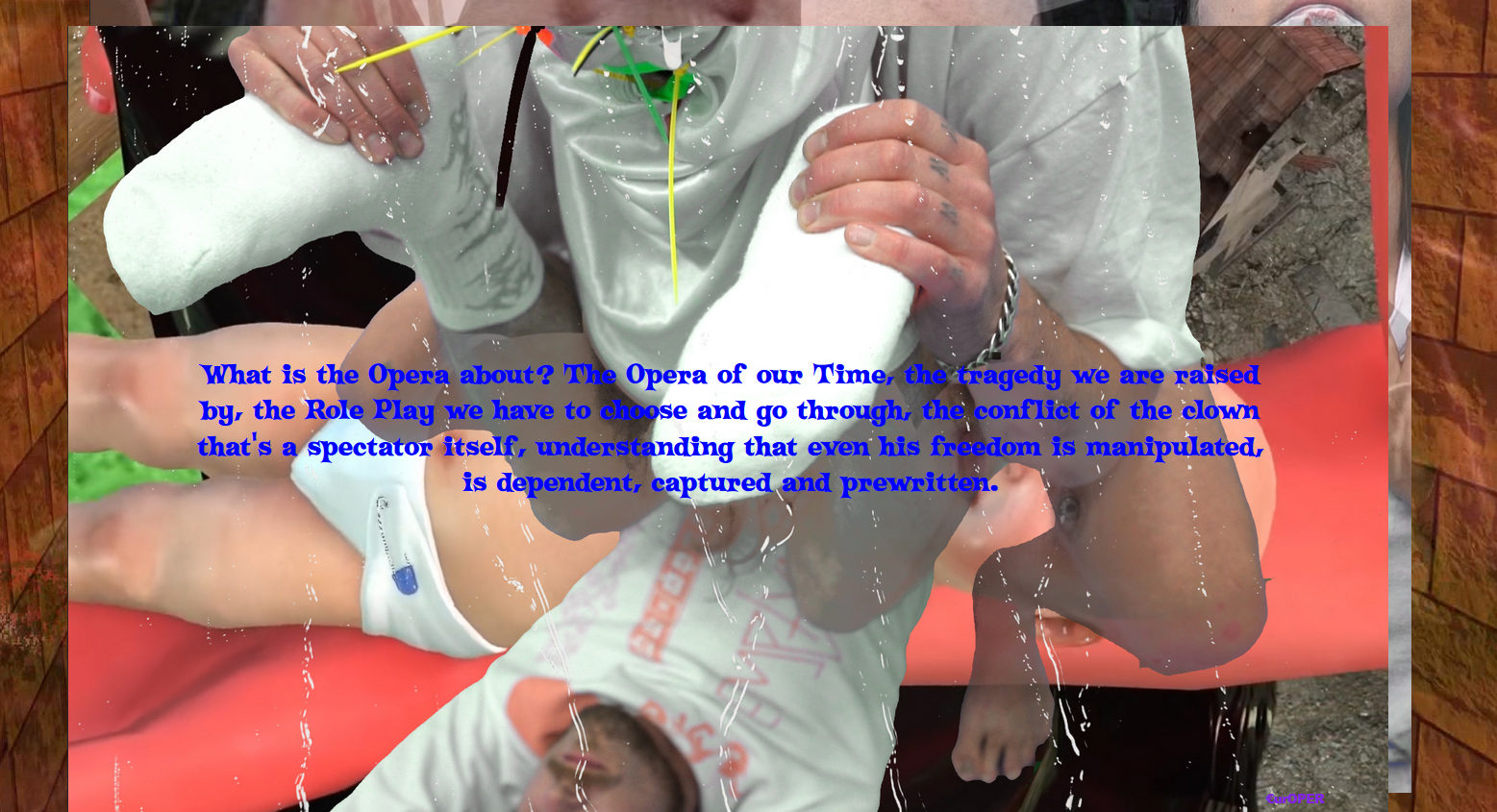 Being born privileged and surrounded by billions of tempting chances, a well feeded mind leads you to a complex scenario that seems to be covered by a shining impassable curtain. A sparkling curtain, knitted by the fairy dust of capitalism, success and society role models. By deep tempting it creates strongly desires that builds up a big hole inside of you, nearly a you hole, expanding to give space, 3 dimensional floorless, to suck this desire and make it a warm burning eternal flame that we start falling into love, a love that turns into a need, a need that never stops and creating an idea of ourselves, an empty depending love, showed to- and made by- the believers.

What seems harder to take than the tears of the privileged, that raises a shining monument that undresses a dream that leads the believers to a created border control, that turns to a role switch that made the clown into the viewer, understanding that the whole play he made is made by others.

Heavy chains, that as well can seem as a railing, as an protecting society uterus that allows us being not responsible for anything, that gives us an idea of meaning within this game and therefor settle a strongly needed value. Empty. Its hard to take this only possibility of being a nobody, while playing individual all the time, struggling and creating own images and models of our self roles. We can’t escape. And the last and biggest challenge is ourselves. The Self is the greatest obstacle, the unbearable problem we have.

Whatever, by living and being born inside this great spectacle, the opera already begun. Surrounded by the big play the roles seems settled, or at least the scripts for possible roles seems already written down, captured in a huge library of the european cosmos. We are part of, we are born into, and now we first have to empty ourselves to see what is the vessel is about, what alternity it helds, or at least, we have to find small gaps of real creation, of Co-determination, to break through the old and given roles and implement some self chosen aspects.

What is the Opera about? The Opera of our Time, the tragedy we are raised by, the Role Play we have to choose and go through, the conflict of the clown that’s a spectator itself, understanding that even his freedom is manipulated, is dependent, captured and prewritten.

Dependence becomes a desire, we are looking for the leader who tells us where to go, who suggests a sense that carries us, that gives us strength, a place in the big game, who opens the curtain so that in the end we remain just a nobody, but a nobody who had something to say, surrounded and strengthened by the Syrians of their own ideas, endowed with unimagined magical powers and fairy tales, powers that the vessel already has in it, a vessel that it forbids itself to be used and wants to shine, deeply buried. And the guide becomes an archeologist, who carefully brings up these beautiful vessels with small brushes and makes them visible, creating a pure culture in its entirety. The vessel itself is the true treasure. Of course it can break, of course it is empty and only seems to be there to carry something else.